Brett Kavanaugh and The Suprem..

Julie Bishop Speaks Out For th..

The USA has once again been subjected to controversy. The newest face for Nike’s most recent advertisement has sparked a heated discussion: ex-NFL player Colin Kaepernick. The famous brand is being boycotted by those who believe that Kaepernick has no place in the spotlight. The boycott has even gained presidential commentary as Trump released a tweet concerning the ad.

Believe in something, even if it means sacrificing everything. #JustDoIt

The Kaepernick ad which carriers the slogan: “Believe in something. Even if it means sacrificing everything”, is not only about racial justice, but also addresses civil engagement. This engagement by the football player can be traced back to the National Anthem controversy in 2016. During an NFL game Kaepernick sparked a firestorm after he chose to take a knee during the National Anthem as a protest against racial injustice.

Kaepernick stated at that time, “I am not going to stand up to show pride in a flag for a country that oppresses black people and people of color”. He continued, “To me, this is bigger than football and it would be selfish on my part to look the other way. There are bodies in the street and people getting paid leave and getting away with murder.” Kaepernick’s decision to take a knee as a protest against police brutality and the police-involved killings of unarmed black men started a lieu of protest amongst other black NFL players. 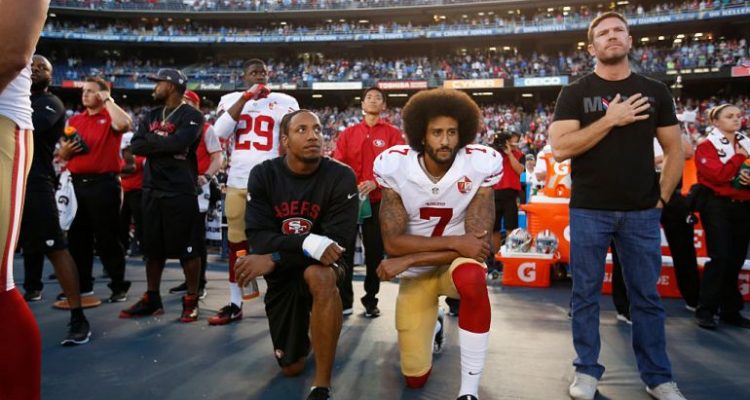 The said controversial ad itself was made for the 30th anniversary for the “Just Do It” Campaign. Having started in 1988, one of the campaign’s objectives was to target all Americans regardless of age, gender or physical fitness level which led to Nike becoming worn as a fashion statement. Since then, Nike had addressed several social issues such as sexism and gay rights. So their dabble in social rights should come as no surprise.

It might seem as if Nike will suffer losses in this broil as many are claiming that they will be boycotting the brand. Burning, defacing, and ripping up their expensive gear are the manners in which naysayers are showing their discontent. They’re even using hashtags such as #BoycottNike to keep the hate rolling.

Our Soundman just cut the Nike swoosh off his socks. Former marine. Get ready @Nike multiply that by the millions. pic.twitter.com/h8kj6RXe7j

While Kaepernick and other NFL players who have kneeled maintain that their protest is about police brutality against unarmed black Americans, critics with the likes of Donald Trump included, continue to claim that Kaepernick is disrespecting his flag and country.

Just like the NFL, whose ratings have gone WAY DOWN, Nike is getting absolutely killed with anger and boycotts. I wonder if they had any idea that it would be this way? As far as the NFL is concerned, I just find it hard to watch, and always will, until they stand for the FLAG!

Many of those who support both the advertisement and Kaepernick believe that the negative commentary and the boycott itself are laughable and ironic. Many supporters poked fun at the boycott as they are filming satirical videos of themselves “destroying” their own Nike gear in ludicrous ways. Even the boycotters attempt to plummet Nike’s stocks by no longer purchasing their products has been compromised as supporters are vowing to buy more Nike products to counteract this.

The collaboration between Kaepernick and Nike is of a positive kind. By observing their history with engaging advertisements– the leap into racial issues was sure enough. However, the fact that Nike are keeping a firm stance on their Kaepernick decision affirms their dedication to highlight social issues.

This strategy is part of something what most people are seemingly forgetting, which is that Nike wants to simply sell. By engaging with a topical subject it is bound for discussion (and attention) to happen. The decision to highlight Kaepernick wasn’t done on a whim either, as he had been under contract since 2011, and reportedly began negotiating a “new, multi-year pact” with him months ago.

As a company that has addressed several social issues over the decades, the company had probably already foreseen that a controversy was inevitable. The risk of a negative response was undoubtedly assessed before making the deal, which makes clear that Nike believes the rewards of sponsoring Kaepernick outweigh the cost.

It seemingly worked as the ad became part of the national conversation within minutes of its release, and while Nike’s stock had taken a minor hit in the immediate aftermath, the attention the brand has received outweighs it by a long shot. This is already reflected in the current stock situation, as it already rose 0,40% towards the positive. Nike is going to make a profit off of social justice and people’s desire to do something for a cause.

Nevertheless, it has been reported that Kaepernick’s deal with the company reportedly includes a contribution to his Know Your Rights charity.

With the ad said to be aired during NFL, some pants will undoubtedly be set on fire, be it Nike branded or not.

Enjoyed the article? Read more like this on Australia Business News!

How You Could Be Contributing to China’s Genocide

Williams to Take the Court in Nike ‘Queen Collection’